SWEDIMS stands for SWEDish Irrigation Management System and it is mainly developed to provide guidelines for irrigation to Swedish farmers, especially during drought conditions. It can also be used by water and energy management agencies to better allocate natural resources.

Despite its geographical location and the abundance of water resources, Sweden can suffer from drought.

In August 2017, Sweden experienced a major groundwater reduction compared with a normal year, especially in the central and southern parts of the country.

During the summer of 2018, Sweden has experienced an even more severe drought that seriously affected the agricultural, water and energy sectors. 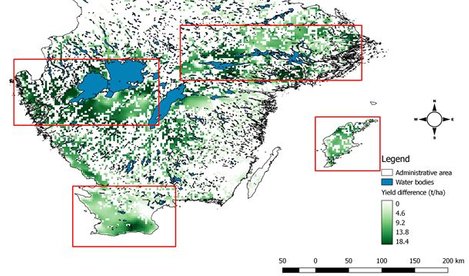 In 2013, a typical drought year for Sweden, drought could severely affect the yield of potatoes, a typical irrigated crop, if irrigation was not applied, with peak yield reductions of 18 t/ha as compared to the potential yield in fully irrigated conditions (Campana et al., 2018).